A Look at Representation in Video Games

Video Games, as every form of mainstream media, contributes to the comprehension and understanding of the world around us.

Dmitri C. Williams notes that “at the same time as games were drawing the ire of conservative society, they were also used as a means of reinforcing social norms and power relations.”

The way we experience video games is best understood to a non-gamer via scholarly works on tourism. Enloe (2000) argues that tourism is as much “ideology as a physical movement” and that it represents a “package of ideas about industrial, bureaucratic life…manhood, education and pleasure”. Video games contribute a “package of ideas” about race, nation, gender, and sexuality as they transport people into a safely performative experience through imagination, virtual cross-dressing, and ethnic sampling.

The gaming industry in the UK alone is now more profitable than video and music combined. It is, therefore, safe to assume that their impact on socio-political perceptions of the world has increased in turn, coming in line with movies and television. Given the active nature of video games compared to the relatively passive exposure to movies and TV, it’s now more critical than ever to do everything we can to reflect the world around us as it actually is within this creative medium; containing a myriad of socio-economic backgrounds, races, gender identities, sexualities, and  physical/mental ability. 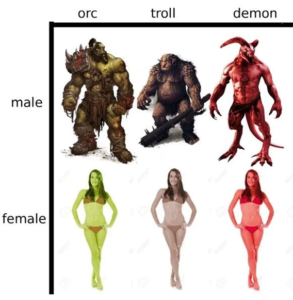 First, some statistics. We love a stat! Children Now found that 64% of platform game characters are male, 19% are nonhuman, and 17% are female. More specifically, 73% of player-controlled characters are male, with less than 15% being female, of which 50% are props or bystanders.

In a word, aliens have better representation in games than women do. And that’s just for cisgender, heterosexual, able-bodied white women.

This is alarming. More than half of the population on earth are women. More than half of GAMERS are women (51%). This isn’t just an issue of games being bad at representation, this is a direct result of the industry itself still being an unwelcoming place for women.

If women continue to feel virulently unwelcomed within this industry, the stories we tell and the narratives that we promote through this powerful medium will stagnate. There’s only so many ways you can tell the tale of a grizzled, bearded white man seeking revenge for the murder of his absent girlfriend/daughter/sister.

When it comes to race, meanwhile, the imbalance in gaming is possibly worse.

More than 50% of player-controlled characters are White males; less than 40% of game characters are Black, of which the majority are athletes or sportsmen in sport-focused games void of a significant narrative. Latinx characters amount to 5% (whom are ALL sportspeople), 3% for Asian/Pacific Islander (usually wrestlers and fighters), and none for multiracial and Native Americans.

Things are even worse when it comes to female characters of colour. Almost 80% of female player-controlled characters are White; the few POC characters are 10% Black, 7% for Asian/ Pacific Islander, less than 1% Native American, and absolutely no Latinx’s.

Jay-Ann Lopez, the founder of Black Girl Gamers, comments on the impact of this chasm in representation on the industry itself: “Lack of racial diversity definitely has an impact on marginalised people being able to envision and seek a career in any industry.”

“To this day, we still hear of the first non-white person to achieve different feats frequently. Within gaming this breeds an exclusionary culture, into which assimilation means the inability to bring an individual’s entire identity to work. This makes it harder for non-white people to enter and succeed in their respective industries.” 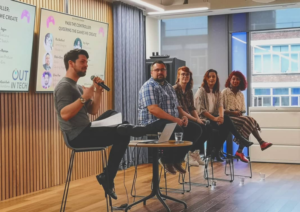 “If we seek to simply be included in AAA spaces, LGBTQ+ content must be better contextualised within both the history of gaming and society,” says Alex Trust, PR Manager at Chucklefish.

Negative stereotypes have existed within the media since old Hollywood, in which LGBTQ+ people were “reduced to images of the sissy man or the butch woman.”

Alayna M Cole, managing director of Queerly Represent Me, a non-profit championing queer representation in games, states: “If developers have trouble seeing this diversity in the world, they need to start by broadening their own circles and communities.”

This is further contextualised by Jade King of Trusted Reviews who says, “If I cast my mind back to only a few years ago, it feels like LGBT representation in the gaming industry has come a long way, but there’s still so much progress to be made. Ellie in The Last of Us. Madeline in Celeste. Tracer in Overwatch. Queer individuals are becoming more commonplace in games, be they indie or AAA. They’re people like anyone else, and their identity isn’t a throwaway punchline or needless plot device.”

When it comes to the industry itself, King is hopeful, noting that “In the development scene and across games media, things are growing more and more diverse when it comes to content creators. There’s so many queer creators I look up to, knowing I can feel safe and belong in this space without worry. If I can do anything similar in my position and encourage other young people passionate about games to pursue their passion, then I’m doing something right”.

But just like games, a minority of bigoted individuals weaponise identities like they contain an agenda, when that’s never the case. Take trans individuals. Seeing them depicted in games in a more intimate way, exploring those struggles directly or having them exist in a world as an element of normality, would be incredibly progressive.

Being a woman involved in gaming seems a hassle no matter how you slice it. They’re scrutinised in a way male peers rarely are and if you happen to be trans, a bad situation is made a lot worse.

It is difficult to encapsulate the breadth and beautiful multitudes of humanity within a single work. However, we are lucky enough to living through a period where many are being heard and seen for the first time as advocates for themselves and others. There is no question that positive, authentic representation of all people within video games is good for the kindness, empathy, and understanding of the world.

But the question remains, how do we arrive on the other side?

Rise of the Unorthodox