Dreaming of a more representative Christmas

For most of us, imagining Christmas in post-war Britain brings to mind tinsel-covered trees, kids in reindeer PJ’s and dads in Santa Claus costumes. Imagined scenes drawn from old family photographs of the likes of It’s a Wonderful Life. Absent from these familial and familiar cultural memories are depictions of isolation, heartbreak and alcoholism that were part and parcel of queer representations of Christmas at midcentury.

Frank Golovitz’s “The Lonely Season,” which appeared in ONE in 1957 is a useful example of this. “I would guess that for at least half the homosexuals in our society,” Golovitz wrote, “Christmas is the loneliest time of year.” In his essay, Golovitz painted a group portrait of several stereotypical queer characters united in their shared struggle to survive the holiday season.

There’s the 17-year-old lesbian who, rejected by the woman she loves and unable to return to the family she left behind, spends Christmas stuck in a shabby Miami hotel room.

There’s the old drag queen who disguises his holiday sadness with alcohol, camp humour and hollow statements that Christmas “is just another day”.

There’s the middle-aged, long-coupled lesbian whose lament, “Why can’t I have a baby like anyone else?” silences her cosy Greenwich Village holiday party. “Why are we trying to act so happy and normal? Christmas isn’t for queers,” she explodes, “It’s for normal, married people, respectable, wholesome people.”

However, we have come a long way since 1957 – but some would suggest not far enough.

Richard Miles, creative director at Therapy and PrideAM member, said: “Earlier in the year, it really felt like we were making progress as representation of the LGBT+ community began slowly improving, but this Christmas it feels we’ve gone back a step.

There are a lot of kids out there watching TV whose lives could genuinely be changed for the better just for seeing two guys or girls kiss, or see a trans person in an everyday situation. The ad industry has the power to make a hugely positive change and we would urge brands to really use this opportunity as a force for good.”

Omnicom’s Phil Clements, co-founder of the PrideAM Creative Review, added: “For Christmas 2019, all we want is authentic, informed and noticeable representation in more than a couple of ads.”

This standpoint is not without justification, as nearly 1 in 16 consumers across Britain identifies as LGBTQ+; and according to a Stonewall report, gay consumers are thought to be worth between £70-81 billion annually in Britain alone. Three in LGBTQ+ people – that’s over two million British consumers – are more likely to buy products if they think a company is queer-friendly, and nearly half are more likely to buy products that use images of other openly queer people and couples to sell their products. These figures alone should strongly suggest to companies that boast a diverse customer base that LGBTQ+ individuals are part of a powerful and lucrative consumer group and should not be marginalised.

So if it’s not the money, what is it? 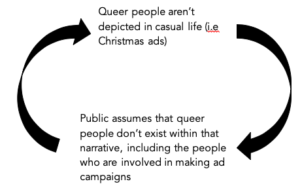 It is therefore not reticent to suggest that the solution for this has one route: break the cycle. During a time where so much focus is on happiness looking one way (the heterosexual nuclear family) and with ‘found family’ and non-traditional familial structures being so much more prevalent lived experience among queer people, it is truly more important than ever to affirm that yes; happiness can look so, so many different ways. And that starts with creating queer stories of happiness that anyone can watch during the breaks of I’m A Celebrity.

So maybe, one day, our holiday blues can look just like everyone else’s.